Chechnya is a very colorful region, where mostly Muslims live. It is religious motives that are very strongly reflected in traditional cuisine. So, for example, a Chechen hostess will never cook from pork, but lamb, chicken and fish are always held in high esteem.

In general, Chechens base their gastronomic preferences on a large amount of plant foods. In the course are not only commonly used vegetables and fruits, but also nettles, wild garlic. Wheat flour is often replaced with corn flour, which is used to make delicious cakes – sisal. Since in these parts there are always a lot of living creatures and, accordingly, shepherds, in the highlands a special place is given to dried meat and dry sausage.

It should be noted that, despite the abundance of sufficiently high-calorie multi-component dishes in national cuisine, Chechen cooking can be considered rational, fortified, as simple as possible and quite soft. Its goal is not to overfeed the eater, but to give him strength and energy.

Today we will talk about the most popular Chechen dishes that can quench your thirst for new gastronomic sensations.

The tricky name is translated in no other way than “meat dumplings”. The bottom line is that a steep broth is cooked on the bone from beef or lamb, in which homemade dumplings are later cooked. It is flour products that give a special charm to the dish. They are made in the form of small funny spirals of unleavened dough, but thanks to the hearty broth they become soft and juicy.

A spectacular presentation creates a sense of celebration, even on an ordinary weekday. Dumplings are served on a large flat plate, fragrant pieces of meat are laid out on top. In the middle, garlic sauce is served in a bowl, consisting of grated garlic, broth, salt and black pepper.

Juicy dumplings and meat are dipped in garlic sauce in turn and eaten with pleasure. Tasting this dish, you can be at the peak of gastronomic pleasure.

Interesting to know! It is zhizhig-galnash that is considered the first dish on which the mother-in-law tests her new daughter-in-law for culinary skills.

Very interesting fluffy cakes with cottage cheese and green onions, which are baked without a drop of oil. They are very much reminiscent of Dagestan miracles, but according to Chechen traditions, the cakes are made thinner and with the addition of feather onions.

The specificity of Chepalgash is that the dough becomes very soft, as if unmixed, which allows the kefir-flour base to bake quickly and not lose softness. The filling is homemade salted cottage cheese, which is transformed with the freshness of green onions. Very fast cooking does not allow the onion to digest inside, losing its aroma and crunchiness.

Such cakes are an excellent addition to herbal teas, which are revered in the Republic.

Also an original version of baking, which can be considered a real weakness of the Chechen people. Unlike Chepalgash, chudshan are open flat cakes made from corn flour, which gives the pastry a wonderful aroma and a beautiful sunny color.

The filling is a filling of kefir, flour, eggs and finely chopped onions. It is poured onto the dough directly into the pan, where it takes on a more decorated look.  The cake is baked in the oven, after having been smeared with fat rustic sour cream, thereby giving the filling an incredibly beautiful fried crust.

Traditional Chechen donuts made from cornmeal. The simplicity of the recipe does not take away the depth of taste from the dish. Unleavened dough is fried in a large amount of oil, which allows it to acquire a ruddy crispy crust that hides the flesh bursting with heat from the eyes. To give a special note, donuts are served with a cold sauce of sour cream and unsalted cottage cheese, flavored with parsley, dill and feather onions.

Sisal is an excellent breakfast or a hearty addition to the first courses – a kind of bread, warmed by Chechen hospitality and comfort.

Interesting to know! Until the middle of the 20th century, in the remote villages of Chechnya, bread was not baked at all, but sisal made from corn flour and its analogue from wheat

It is made in the likeness of zhizhig-galnash, only in this case a chicken carcass is used, which is pre-cut into pieces and boiled in a small amount of water to obtain a beautiful rich broth. Part of the broth is left for the table, and appetizing dumplings are cooked in the rest. They are served separately from meat and broth, making it possible to break off the required amount of chicken pulp and, putting it to dumplings, season with spicy onion sauce, washed down with chicken broth.

Such a dish is always prepared in large quantities to feed both family and friends. The highlight of the dish is in the sauce, which incorporates the best juices of the broth, the creamy taste of melted butter, the incomparable aroma of thyme and the tenderness of milk, which is added at the very end.

Wonderful unleavened cakes with pumpkin filling. Outwardly, a simple dish has a lot of subtleties, so the housewives who are able to cook the right khingalnash are called real craftswomen.

Delicate kefir dough allows you to roll out the base very thinly and securely seal the juicy pumpkin-onion filling until serving. The filling, despite the presence of fried onions, is made quite sweet and a secret ingredient is added that sets the rhythm for the whole dish – fragrant thyme.

Usually the hostesses prepare khingalnash from the very morning in order to have time to bake cakes for dinner for all the guests. After all, besides the fact that you need to bake them (only in a dry frying pan), you need to properly serve them, and this is a whole rite. Khingalnash, which by the time of cooking, begin to cool down a little, warm up, dipping for a split second in hot water, and pour ghee on it. In this way, each cake reaches the right temperature and is saturated with a creamy taste that contrasts perfectly with hot tea.

As for hot drinks, traditional tea is rarely consumed in mountain villages. For brewing, tea herbs are used there: thyme, Ivan-tea, kochari. 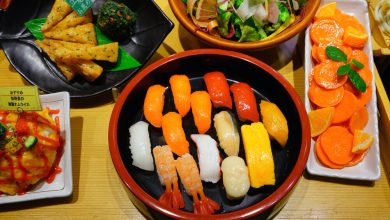 Georgian dishes to try in Batumi